A bit of background to this picture as many people have asked...

I was discretely photographing an anti Hs2 demonstration outside Parliament to document the real numbers that turn up compared to the inflated numbers the organisers always claimed. After a while I was recognized by a couple of the demonstrators who passed the word on to the demo organisers. Next thing I knew they'd made an announcement by megaphone, saying who I was and where I was (the other side of the road). The organisers then asked the whole crowd to boo me. Dutifully wound up, the few hundred people there did. This particular woman (Mop Denson) decided to go further and flick me a V sign.

What a bad idea.

The moral of the story is - never, ever flick the Vs to a photojournalist with a long lens unless you want to make a complete fool of yourself & get exactly the opposite sort of publicity you'd been been courting..
NIKON CORPORATION NIKON D4, f/6.3 @ 105 mm, 1/500, ISO 500, No Flash
Categories & Keywords
Category:
Subcategory:
Subcategory Detail:
Keywords: 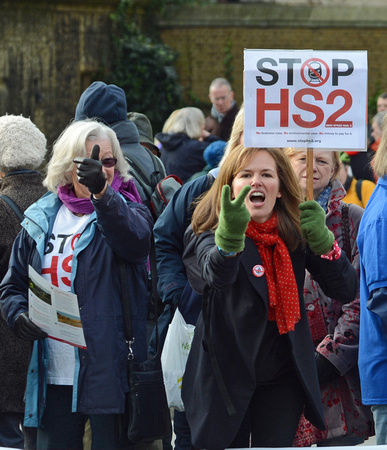